This message is for Myanmar and all governments that have oppressed religion, holiness or monks. Govern your citizens with fairness. Otherwise, the government will be overthrown by revolution, someday. Wherever there has been unfairness, there will be demands for justice. You cannot be strong forever; the law of nature will eventually take away your power. You must stop killing innocent people now or you too, will be doomed in a painful and shameful way. Monks requests for fairness and freedom is reasonable and normal. Governments should not harm monks, because it is dangerous to kill innocent people.

Burmese people have struggled for years to ask for freedom. Why do they have to ask for freedom when it is a fundamental right of all people? Why do you restrict their freedom? They are not criminals. Is it because you are insecure and fear that if you grant them freedom, they will do a better job than you and make you look like a failure? You also understand that people have uncertain living, and limited patience. You don’t prolong until they have to wrestle with you and press you down in order to get back their freedom. Just give to them as a gift, it is not yours anyway. Unfairness is suicidal.

You should realize that the only reason you have your power is because weapons are in your hands. You may not realize that, when there will be no more weapons in your hands, you will be powerless like other innocent people. What will you do at that time? Remember power ultimately is the people. 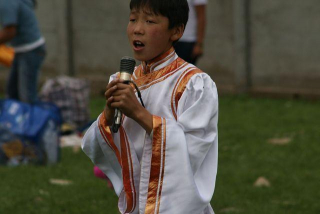 I recommend you to look at world history just for a moment. The Chinese First Emperor, Ch’in Shih-Huang of China, was a filthy doomed due murdered by buried many Confuciasm’s students alive. The Emperor of Rome–Nero was doomed due to oppression of religious leaders. The King of Russia, Alexander was also doomed due to killing Orthodox monks. The German Nazi regime was also doomed because of religious persecution of Jews. The Ngo Dinh Diem of South Vietnam with his brother were doomed due to oppression of Buddhist religion. Mao Zedong was doomed. He killed great numbers of Tibetan monks and ousted Tibetan Holy men, as well as killed 700,000 of Chinese farmers. Those powerful, who have committed ruthless tyrannical actions, have died, and you too will die, but whether you die in honor or in disgrace is up to you. History will always set straight.

The Burmese monks, who are peaceful and gentle, have deep understanding of causes and effects, and teach on compassion and love. Buddhist monks in general deserve to be respected for their renouncing of the worldly life for living in a non material life. Monks are holy and peaceful and their daily practice is only aimed at being beneficial to others, not for selfishness. If there is freedom and fairness by the government, there will be neither protests nor demands to ask for freedoms and human rights.

For so many years, Burma has been known by other Buddhists as the “center for wisdom in the universe” where monks practice to uproot inner sufferings and teach others as they learn. Monks live in poverty and the Burmese people are not getting better from economic eyes. The neighboring country, Thailand, has all kinds of freedoms and their people live a peaceful life and are moving upward. But Burmese people cannot move upward due to the condition of the military regime. People respect the monks because they are holy and peace-loving people. Naturally, all living beings prefer peace over war, no matter what. The people of Burma deserve to be free from your oppression. Tyranny and evil actions will always invoke a shameful death.
You must stop killing Burmese monks now. Killing Buddhist monks and innocent people won’t solve problems and is considered unethical
What will happen if your power is taken away from you? You will die in a shameful way, and you will have no credit for the word except your horrible reputation as evil tyrannical dictator? Who died in disgrace and ignominiously with bodies battered. It doesn’t matter what materials you built for a city or nation. It won’t count, when you don’t treat people with fairness and freedom. When you die, your body will be filthy and dismantled, and your filthy reputations stay forever in history books.

For the soldiers who serve dictators, you should not be slaves for those the dictators, you should lay down your weapons, and come home with your family. Why is a soldier for an unfaithful commander? You are the powerless, pitiful soldiers. Without a uniform and weapon in hand, who are you? And why are you shooting at your own citizens? For being a faithful slave to the unfaithful owner? You can refuse to oppress innocent citizens. Stop all actions against your innocent people.

Stand up against unfairness and injustice, will bring hope and light for many. You sure will have the true power and it makes you capable to eradicate problems and sweep away oppressive dictator’s policies, as well as pains and sufferings of your nation. If you think you are good and powerful, but you do nothing to help others suffer from unfairness and injustice, you are ultimately helping evil.